GILLIAN REINHARD ’20
EDITIOR-IN-CHIEF
Two Trinity students were mugged while studying abroad in Barcelona. The altercation occurred in the early hours of the morning of Jan. 7 and was preceded by an attempted mugging of a female student the night of Saturday, Jan. 6.
Two students currently studying abroad in Barcelona, who wish to remain anonymous, independently confirmed to the Tripod the events of the night. One of the students explained that the crime was “violent, not your average pickpocket, although no one was seriously injured.” The two male students took an approximately ten-minute walk from a beach nightclub to the dorms provided by the Trinity in Barcelona program early in the morning, and were approached by a man with a knife. Both students were robbed of their phones and contents of their wallets, and one of the students was allegedly assaulted.
Earlier in the night, between 8:00pm and 9:00pm, a female Trinity student walking alone was approached by two men about five minutes from the Universitat Pompeu Fabra (UPF) dorms. According to the students abroad who spoke to the Tripod, one of the men grabbed her from behind and placed a hand over her mouth, with the intention of stealing her phone, but gave up after not being able to find any possessions to take. The female student was unharmed.
All three students reported the crimes to the coordinators of the Trinity in Barcelona program, and the female student allegedly led a report with local police. According to the student who spoke with the Tripod, “the program director explained to the students that this was the first time anything like (the muggings) had ever happened.” 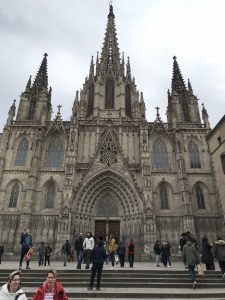 The program coordinators speculated that people had come to Barcelona specifically targeting foreign students on what they knew would be their first night out.
Director of the Office of Study Away Jennifer Summerhays and Assistant Director and Advisor to
the Trinity in Barcelona program Zachary Macinnes explained to the Tripod that, as one of the most popular tourist destinations in the world, Bar- celona is subject to many petty crimes that are not typically experienced by participants in the Trinity in Barcelona program. Before beginning the program, students are given as many tools as possible to keep themselves safe, including being advised to travel in pairs, avoid certain areas of the city (particularly at night), and keep important possessions in safe areas.
Students currently abroad told the Tripod that several students participating in the program were concerned for their safety after the event. However, the muggings were addressed during an orientation program the next week. Additionally, female students were offered a self-defense class in case they were targeted again, which was well-received by the students who chose to take the course. Overall, the situation was described by a student who reached out to the Tripod as “handled very well (by the Trinity in Barcelona program coordinators), but still really scary.”