This past weekend, Trinity’s softball team faced Bates in the NESCAC East Opener, demolishing the Bobcats and sweeping them again in two home games the following day. The Bantams improved their record to 11-5 overall, and 3-0 in the NESCAC East division.

The division opener picked up when left fielder Erica Merullo ’18 began the inning with a base hit before stealing second base. A ground ball out by captain Michelle Treglia ’18 gave Merullo the opportunity to adv

In the second inning, Bates picked up their game with a walk by Mary Collette. Singles from Paige Ahlhom and Kirsten Pelletier loaded the bases, but Trinity’s captain Rachael Smith ’18 escaped the jam without

Trinity inched to an impressive 8-0 lead in the third inning as Thomas and captain Meaghan Race ’18 both secured runs on RBI-singles. Both teams struggled to score in the fourth inning, but Bates managed to score once in t

ge of a sacrifice fly off the barrel of Collette. The Bantams faced a resilient Bobcat pitcher, kee

ping Trinity from scoring in the home half of the inning. Despite the obstacle, Trinity was successful in the following inning. Treglia finished the game with a hard-hit double down the left field line, bringing Erickson to the plate. Treglia would ultimately score as well. The game ended with a consistently-played 9-1 victory for Trinity. 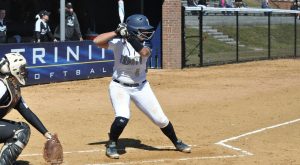 The Bantams faced Bates in a doubleheader the following day, both games started slow forTrinity but the team managed to sweep the Bobcats yet again. In the first game, Bates started off with a 2-0 lead in the first inning but Trinity quickly climbed back with the help of Katie Haghdan ’18, Treglia, and Erickson. Bates struggled to keep their lead and Trinity snagged a 4-3 win. They would go on to win the second game in the doubleheader by a margin of 6-5.

Next up for Trinity softball is two sets of doubleheaders at Coast Guard and home against Hamilton on April 4 and 7 respectively.