MATEO VAZQUEZ ’21
STAFF WRITER
The Trinity College Men’s Squash team put up a brilliant fight this past weekend for the CSA Squash National Championship. Their training throughout the entire season built up to this moment. While they dominated the competition for much of the season, that is not to say that they haven’t been faced with some adversity, namely in regular season matches against Yale and St. Lawrence. Playing in front of their home crowd, Trinity toppled Princeton, St. Lawrence, and Harvard to garner their 17th National Championship title in the last 20 years.
Trinity’s first match was a dominating performance and a testament to the hard work they have put in throughout the season. The match, while very heated at times, was ultimately well controlled by the Bantams. Three players who stood out on the court were Thoboki Mohohlo ’19, Michael Craig ’19, and Rick Penders ’18, who were all able to secure their matches at 3-0 against their Princeton opponents, contributing to the 8-1 team win. This match also proved to be a growing experience for the team, as the younger players on the team were able to experience the pressure and grind of a National Championship. During his match, Ziad Sakr ’21 began on a shaky start and found himself in a tough position early in the second game. Despite the pressure, Sakr collected himself mentally and made an amazing comeback, squeezing out a 12-10 win in the second game. Tom De Mulder ’19 won the match-clinching point for the Bantams with his 3-0 win against his Princeton opponent. 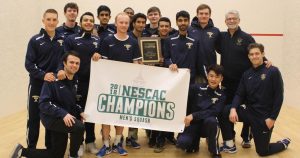 The Bantams were able to advance past the quarterfinals for a rematch against one of their toughest opponents, the St. Lawrence University Saints, ranked fourth in the nation. The Saints were Trinity’s toughest opponent in the regular season, and that would once again be the case over the weekend. St. Lawrence proved early on that they were ready to spoil Trinity’s chances for a 17th title as they took a 2-1 lead after the first wave of matches. James Evans ’18 was the only light early on for the Bantams, making quick work of his opponent in the nine spot. After key Trinity wins by De Mulder and Omar Allaudin ’18 all eyes were on Kush Kumar ’20 in thefirst court. Kumar dominated his pressure-filled match, at one point winning 18 consecutive points against his opponent, including a 11-0 win in game two. Penders’ loss to his opponent brought the final score of the match to 5-4, the same margin of victory achieved against the Saints during the regular season. This win allowed the Bantams to advance to the championship match against Harvard. The pressure and intensity of the final match was shown by both teams from the start. James Evans and Ziad Sakr provided Trinity with two key opening wins. Evans saw himself down two games to none against his opponent before storming back to garner the emotional win in his final match as a Bantam. Michael Craig and Tom De Mulder gave the Bantams the push that they needed, winning their matches 3-1 and 3-0 respectively, bringing the overall score in the match to 4-1. The match ultimately came down to Andrew Lee ’20 against Harvard’s Julian Gosset. Lee was able to maintain a lead early in the match which gave him a good position to work with as the pressure mounted later on. The crowd gathered around for the fourth and fifth games as it became obvious that this could be the championship-clinching match. Leg cramps late in the fifth game almost stymied Lee, but the enthusiasm from the crowd lifted him to the 3-2 match victory, clinching the Bantams 17th National Title.