CAT MACLENNAN ’20
STAFF WRITER
The Trinity Men’s Hockey team went into the weekend with eyes full of grit, ready to take on the NESCAC championship tournament, hosted here in Hartford. The game against the Williams College Ephs Saturday afternoon started off in the opposing team’s favor with two unanswered goals for Williams in the first fifteen minutes of the first period. Shortly after, Williams scored their second and final goal of the game, Ryan Pfeffer ‘19 answered with his first of two goals of the game to get the Bantams on the board. 29 seconds into the second period, Pfeffer scored his second goal to tie the game. This momentum pushed the Bantams to take control while Andy Chugg ’20 put the Bantams in the lead two minutes later on a rebounded shot from fellow classmate Adam Anderson ’20. James Callahan ’21 added a goal shortly before the end of the second period, blowing a kiss to the student section, adding to the energy in the stands. T 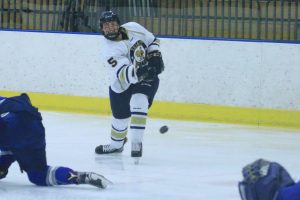 he Bantams dominated in shots-on-goal in the second period with a 20-4 advantage. Tyler Whitney ’18 added to the five unanswered goals in the third period to make the final score 5-2. Bantam goaltender Alex Morin ’18 finished with 14 saves while the Trinity offense finished with 40 shots to Williams ’16. This was the second year in a row that the Bantams have moved past the Ephs to make it to the NESCAC championship game.
With the wind at their backs, Trinity headed into the finals at the Koeppel Center against the Colby College Mules, going for their seventh NESCAC title. The first period was scoreless for both teams but several shots were taken, proving that the sixth-seed Mules were not going to back down against the home favorites. Trinity had the 12- 10 advantage on shots, but were unable to make it past the Mules. Goaltender Alex Morin had many crucial saves in the first period to keep the Mules away from scoring. After four saves by Morin in the first two minutes of the second period, Colby snuck by Trinity and stuck the puck in the back of the net, making the score 1-0. The Bantams continued to attack the Mule net, but Colby’s goalie proved to be too good. Meanwhile, the Mule offense added to their lead four minutes later to make it 2-0 against the Bantams.
Trinity came out ready to fight in the third period and it was Michael Grande ’21 that put the Bantams on the board four minutes in. The Mules were quick to regroup however, scoring just 13 seconds later to silence the hopeful crowd. The Mules sealed their 4-1 score with two minutes remaining in the game on an empty net goal. The Mules were seeded sixth in the NESCAC going into the final game, gaining their first NESCAC title and an automatic bid to the NCAA tournament. On the other hand, it was a devastating way to end the season for Trinity as they failed to receive an at-large bid to the NCAA tournament.