TAYLOR KAY GREEN ’19
CONTRIBUTING WRITER
Trinity women’s rowing is an interesting team to watch this year, as their overall performance is quickly trending upwards. Women’s rowing finished up their third and final meet of the season on Oct. 28 at Skidmore. This was the last of three meets in the fall season. The Bantams will pick up in the spring with a busier schedule, where there have five meets scheduled. Based on the improvement from last year made this fall, the spring looks like it could be a break-out season for the Bantams.
The fall was a successful season for Women’s rowing, as they improved on last year’s season in almost every m 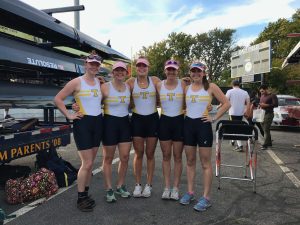 eet. In the first meet, a home meet held in Hartford at the Riverfront Regatta, Trinity finished third in the four person women’s open race, and eighth in the eight person women’s open race with times of 19:29, and 16:42, respectively.
The second meet of the season was held in Cambridge, Massachusetts at the Head of the Charles. Trinity finished ninth in women’s varsity four boat out of 36 teams. They finished with a time of 18:46, just behind Williams. The crew for the Bantams includes Sarah Duffy ’18 and Antonia Bowden ’18 leading the young but talented group, and improved significantly on last year’s 27th place finish.
Trinity had teams in the novice four division, as well as in the varsity eight rower division. Trinity novice crew 1 finished second of 18 crews and Trinity novice crew 2 finished 13th in the same race. The varsity crew recorded a time of 12:57, which was good enough for 10th place in a field of 22.
Men’s rowing also had a successful fall season this year with the varsity squad cracking the top three in four out of five matches. The Bantams finished first in one race, second in two races and third in another race. In the spring, men’s rowing has seven matches and will be an exciting team to watch as they look to improve on their already impressive fall season.