The Trinity College Men’s Track and Field team has had a full slate of meets to begin the 2018 campaign. The men began their indoor season at the Embry-Riddle Challenge in Daytona Beach, FL during winter break before travelling to Springfield, MA for the Massasoit Invitational at Springfield College. To start out the month of February, the Bantams competed at the Wesleyan Invitational in Middletown, CT before heading to Boston o 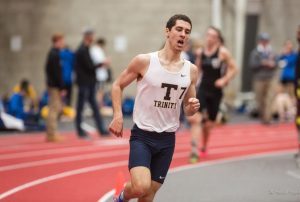 n Feb. 9 and 10 for the Gordon Kelly Invitational at MIT. The Bantams competed as individuals during all of these meets with Ace McAlister ’20 leading the way in the long distance events while Luke Mayer ’19 led the way in the short distance events.
Trinity track and field began the new year in warm Daytona Beach, FL training for the anticipated season. During their final weekend in the warm climate, the men’s team competed at the Embry-Riddle Indoor/Outdoor Invitational. Luke Mayer ’19 impressed for the Bantams as he took home a close second place finish in the 60 meter hurdles event, finishing just 0.63 seconds behind the first-place finisher. Stephen Tyler ’21 and Zachary Joachim ’19 both competed in the 1,000-meter event, garnering second and fourth place respectively. Meanwhile, in the long distance events Ace McAlister finished fourth in the 3,000-meter event with a time of 8:49, followed four spots later in the same race by Joseph Ruggiero ’19.
The Bantams returned to the frigid temperatures of Connecticut the following week to begin classes and continue practicing. On Jan. 27 the Bantams made the short trip to Springfield, MA to compete at the Massasoit Invitational. McAlister tried his hand at the 800-meter run in this meet, this time bringing home a fifth-place finish with a time of 2:05. Erkin Verbeek ’21 impresses in this meet as well, finishing less than a second behind McAlister in the same race. McAlister’s woes would not last for long however, as he took home first-place in the mile run, finishing with a time of 4:33. Ruggiero was also able to shake off his tough performance in Florida, finishing in first-place in the 3,000 meter run with a time of 9:03. Daniel Hughes ’18 added a second-place finish in the 400-meter dash.
The following weekend, the men travelled to Middletown, CT to compete in the Wesleyan Indoor Invitational. McAlister shined once again for Trinity, finishing first in the 3,000-meter run at a time of 8:46. McAlister comfortably won the race, finishing more than four seconds ahead of second-place. Luke Mayer impressed once again in the short-distance events as he garnered another second-place finish in the 50-meter hurdles with a time of 8.60 seconds.
This past weekend the Bantams travelled to Boston to compete in the Gordon Kelly Invitational hosted by MIT. Trinity couldn’t continue their recent success and struggled to secure top scores, but nevertheless fared decently. In the 3,000-meter run, Timothy Bogomolov ’20 finished seventh with a time of 9:21, while teammate William Estony ’21 finishing just four seconds behind Bogomolov, placing 10th overall. In the 60-meter hurdles, Jack McInnis ’19 managed an eighthplace finish overall, just .28 seconds off the lead. Next up for men’s track and field is the New England Division III Championships at Middlebury on Feb. 17.