AMANDA HAUSMANN ’21
FEATURES WRITER
Trinity student Rinom Chowdhury ’20 was arrested by Israeli police officers on the outskirts of the Old City of Jerusalem on Friday, Jan. 12. Ms. Chowdhury was travelling through Israel and Palestinian with an interfaith group, ve of them Trinity students, through the Tree of Life Educational Fund.
That morning, Ms. Chowdhury, Yasmin Affey ’19, Philisha Abrahim ’20, and five others separated from the group to spend time at the Al-Aqsa Mosque in Jerusalem. After they exited the mosque, they took pictures of the buildings and with a Palestinian flag which a different group had with them, Ms. Chowdhury says. As they were walking back to meet the rest of their group, Ms. Chowdhury recalls that she and four others, none of them Trinity students, were sectioned off by Israeli police officers and asked to show their passports and to walk with the of cers to an undisclosed place. Ms. Chowdhury says the officers brought them to a police station where she and the others were searched and their passports were taken. Ms. Chowdhury also says they asked if they could call someone from their 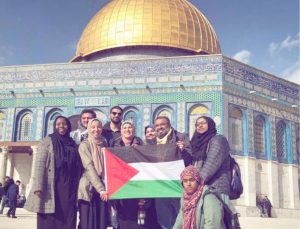 group and the officers took their phones. They were then taken to a second station where the officers separated the girls from the boys “and there were two soldiers there watching us, not giving us any information about why we were there,” Ms. Chowdhury recalls. After about four hours, a lawyer who was sent in by their group informed Chowdhury that the police wanted to charge her and others with inciting a riot. Next, Ms. Chowdhury was interrogated by an officer via a translator who asked why she was at the mosque, what she had been wearing when she was there, and why she had been taking pictures. “They also took our handprints and pictures and showed me security footage of us from when we were at the mosque and asked me to point myself out,” says Ms. Chowdhury. Ms. Chowdhury says the of cers explained that the charge was due to the picture they had taken with the Palestinian ag but that it would not be pursued and that this was not an official arrest.
After another three hours, she and those with her were given back their passports and phones and were released without further incident.