In a comprehensive evaluation of Trinity College conducted in March 2017, the New England Association of Schools and Colleges alludes to potential compliance violations with the Americans with Disabilities Act (ADA). Their findings are explored in a 40-page document, commenting on the strengths and weaknesses Trinity faces in a host of categories including Mission and Purpose, Academic and Financial Resources, Governance, and Educational Effectiveness.

Further bodily functions such as immune system functions, digestive, and neurological functions are also covered by the bill. Trinity has started formulating solutions to ensure compliance.

Student Accessibility Coordinator Lori Clapis is dealt the task of managing students with learning disabilities or emotional disorders, among other responsibilities.

For students willing to report any disability they may have, or those who would like to report an “access concern,” Ms. Clapis is the contact for reference. While she says her most popular cases of impairments are 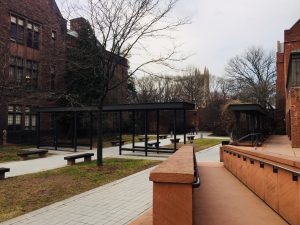 dyslexia and ADHD, she also mentioned experience with anxiety issues among students.

Following discussion and proper diagnosis, Trinity makes a variety of academic accommodations, which are outlined online to include extra time or reduced distraction space for exams, extra sets of notes, access to audiobooks, use of recording devices, etc. There is little evidence to suggest Trinity’s lack of compliance is for those with learning disabilities or emotional disorders, but rather for building code and physical accessibility.

When asked how Trinity falls short of ADA, Ms. Clapis said accessibility is a massive task and the College does prioritize filling it’s voids. She also mentioned the difficulty of making a campus as old as Trinity’s fully wheelchair accessible, a critical ordinance of ADA. Multiple educational buildings on campus, like McCook, do not have elevators, and for this reason, accommodations must be made for those permanently or temporarily disabled. Classes may switch buildings for someone who has broken their foot.

There is no designated leader to address capital investment for ADA in Trinity’s old buildings; however, Dean Joe DiChristina is said to be conducting projects this summer.

Furthermore, following multiple inquiries for a financial plan to address overall deferred maintenance, the NEASC team found no such plan, but rather a recognition that funds should be allocated.

NEASC concluded their facilities evaluation by mentioning that Trinity’s campus renewal was “significantly underfunded,” addressing larger concerns regarding the campus’s extensive deferred maintenance—a figure estimated to be $135 million, an increase from $77 million in 2006. Trinity does address this in its strategic plan.