By Chris Bulfinch ’18
News Section Editor
Since the beginning of the semester, Trinity’s Campus Safety has released updates informing students of incidents around campus. Updates come in weekly, sometimes multiple times in a week, detailing occurrences wherein the safety of students or their property was in somehow threatened.
Campus Safety sent out email updates regarding incidents occurring on Sept. 17, 23, and 25. The episodes involved a report on the events of Sept. 17, where students were accosted by an individual who was “aggressively panhandling,” and another incident where students encountered a group of individuals who attempted to sell narcotics, in addition to trying to access campus housing. On Sept. 23 a number of youth were loitering around St. Anthony’s Hall, and threw things at the residents who confronted them. A bike was also stolen from a house on Allen Place. A car was stolen and a townhouse was burglarized on Crescent Street on Sept. 25.
An email reassuring the Trinity community that “the College has taken steps to investigate these incidents and to prevent them from reoccurring,” was sent out on Sept. 26.
The steps taken by Campus Safety included “reviewing video and sharing it with the Hartford Police Department, increasing our visible presence in the areas of campus that have been impacted, identifying and correcting environmental factors that may have contributed to these incidents and temporarily hiring police officers to work during the weekend.”
Brian Heavren, the Director of Trinity’s Campus Safety, notes that the recent property-based crimes, particularly involving students’ cars, are part of larger trend in Hartford. According to Heavren, car-based property crimes are one of the only categories of crime in the city that have increased recently, which may explain the recent incidents around Trinity’s campus.
In regard to instances of loitering and attempted dorm access, Heavren noted that most dorm-related incidents stem from common courtesy. “What we do see is the piggybacking, and that’s really just people trying to be courteous, but what we have to be thinking about is if this is someone who has some other intent,” reflected Heavren. While acknowledging the difficulty of making such a determination, Heavren encouraged students to “challenge” unfamiliar individuals attempting to access dorms.
Responding to the car-based property crimes, Campus Safety has relayed information to the Hartford Police Department. In the past, Campus Safety’s work with the Hartford PD has “been fairly successful” in investigating incidents on Trinity’s campus, in Heavren’s words. According to Heavren, Hartford PD assisted in identifying suspects in several incidents on Trinity’s campus last year, including a number of minor property crimes and as the incidents involving inappropriate advances and touching of several female Trinity students.
The relationship that Campus Safety has with the Hartford PD primarily entails the sharing of information about incidents, and facilitating communication between the police and relevant students, faculty or staff.
Heavren mentioned that in addition to the measures discussed in the emails sent to the Trinity community regarding the recent incidents, Campus Safety will strive to make themselves more visible in high-traffic areas around campus. Additionally, Campus Safety has adopted the practice of posting notices made to look like fake parking tickets on students cars. These tickets notify the vehicle owner that their vehicle has been deemed particularly high-risk for theft or other property-based crime. 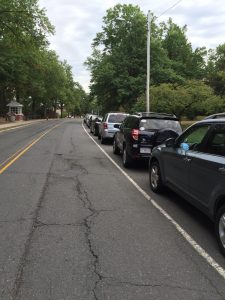