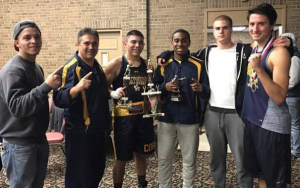 The Trinity College Boxing Club is proud to celebrate the success of team member Joseph Orosco ’19, who placed first at Regionals in the East Coast and competed in the National Championship in Lawrenceburg, Indiana. Orosco, who was fighting at the 156-pound weight class, entered Nationals as the Regional Champion from the East Coast, following a three-day fight to victory in the Regional Competition. On the day of Nationals, Orosco advanced to semi-finals, received an All-American Certificate, and was awarded with the 2017 Sportsmanship Award. Orosco remembers it as a tough battle, as he was paired up to fight against last year’s National Champion.
The Trinity College Boxing Club has experienced tremendous success over the past few years. Josephine Tannuzzo ’18 first joined the Boxing Club during her first year at Trinity in 2015. She says that when she first started, the team used to “work out, without a coach, in the wrestling room with one bag and a terrible rack holding it up.” Tannuzzo and other members of Trinity’s Boxing Club are thrilled about the club’s new partnership with the Charter Oak Boxing Company, a nonprofit organization that offers them a great space to practice in, and their new coach, Johnny Callas. This is a drastic improvement from Tannuzzo’s first-year experience, and she expresses gratitude over the fact that “now we work out with our coaches in a professional gym, sending off kids to make us proud like Joseph has.” Tannuzzo speaks very highly of the Boxing Club, stating that, “Although there is a strong component of individual improvement in the sport of boxing, a boxing gym is one of the most nurturing places to spend time. We all work together in every aspect, from working out together to being support systems for each other.” The Boxing Club has been an overwhelmingly positive experience for Trinity students. The team’s Vice President, Jack Agosta ’17 is tremendously proud of the success that the Boxing Club has experienced since 2015. Agosta, who will be graduating from Trinity in May, says that, “It has been an incredible experience watching this program grow, and I feel like I will have left a lasting legacy.”
Since the Boxing Club’s 2015 partnership with the Charter Oak Boxing Company, the team has retained a steady group of about 30-35 boxers and started attending competitions in October. The Charter Oak Boxing Company offers them an excellent off-campus practice space, as well as the opportunity to foster an inclusive environment between Trinity students and the Hartford community. Team members serve as mentors to Charter Oak Boxing Company kids, and they’re looking to expand the program to include tutoring and academic aid as well. Coach Johnny Callas says that the Trinity boxers “quickly bonded and established a magical chemistry with their Charter Oak Boxing Academy teammates from inner-city Hartford, who they agreed to mentor and tutor.” Callas enjoys “facilitating a mutually beneficial and special relationship between the Trinity Boxers and their inner-city, younger teammates from the Charter Oak Boxing Company.”
All Trinity students should support the Boxing Club in action on Saturday, Apr. 22, in Trinity’s Oosting Gynasium in Ferris. The event will feature Trinity boxers, boxers from the Charter Oak Boxing Company, and boxers from other schools such as the University of Connecticut and the University of Massachusetts. This event was made possible through Coach Johnny Callas, who was able to find sponsorship through his many connections within the Hartford community and through funds from the Charter Oak Boxing Company.