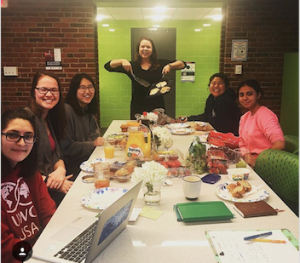 The Trinity Tripod chatted with Chanel Erasmus ‘15, about her time at Trinity as an undergraduate, and now, her role on campus today as a Trinisition fellow for the Book and Brownell nests. Chanel has played an important role in the development of the Bantam Network, which was designed to help first year students transition from high school to college life.
Chanel’s impressive squash career as one of the top junior players in her home of Cape Town, South Africa, heightened her interest in coming to Trinity for college. Her coach, at the time, had several connections in America, and felt that this would be a great fit given Chanel’s level of academic success. “Trinity was at the top of my list because it was a fantastic squash program and I knew I would also be able to get a great education out of it which was very important to me,” she said.
Because high schools in South Africa have different academic years than that of those in America, Chanel graduated in December of 2011 and immediately arrived at Trinity that following January. As a January recruit, Chanel began her first year a semester behind everyone else. Because she had missed orientation, and only a few others were in the same situation as her, she described this time as being very difficult. “I was very lucky that I went straight onto a team,” she said.
Even though she came a semester late, Chanel managed to graduate with the rest of her class in 2015, with a major in theater and dance, and was involved with an array of different activities during her time at Trinity. Not only was Chanel a member of the squash time, she also was on the women’s rowing team. Besides athletics, she was on the Vernon Social Programming Board, an R.A. for three years and an alumni ambassador. She also worked in the library, in the athletic department as a public announcer for various sports games and was involved in several theater productions.
When Chanel heard about the Bantam Network, she was drawn to the program. “I value what the program stood for which is connecting students to resources on campus, connecting students to Hartford and connecting students to alumni,” she said. Being a January recruit with a tough transition to Trinity, she wanted to help first year students feel a sense of belonging from the moment they step on campus. “I owe Trinity so much for where I am today and what I’ve done in my life and I am not at the point yet where I can give back thousands of dollars to Trinity, but I am at the point where I can make a difference on campus and help students feel the same sense of pride and belonging that I did. This is my way of giving back to a school that really gave me so much,” she said.
This is Chanel’s second year as the Trinisiton Fellow for the Book and Brownell Nests, which are comprised of roughly 115 students. Chanel is responsible for planning and executing a variety of weekly events for her nests. Every Tuesday morning, she holds “Breakfast Club” in the Jackson/Wheaton Common room, where she makes breakfast from 7:30-10 for her students. This gives her a chance to talk with first students in a social setting, and provides them a fun weekly event to attend with their friends. When Chanel isn’t hosting activities for her nest, she is usually meeting with students. “Meeting students where they are at is part of our daily routine,” she said. It is rare that an administrator is available to students during lunch time, or after dinner, which are the times that most college students are available. Luckily, first years now have an administrator who is available to meet with them at their own convenience to talk and seek advice about classes, social issues, extracurricular activities, residential life, etc. Not only is Chanel a dedicated Trinistion Fellow, she is currently in the College’s master program studying public policy.
When asked, “What is your favorite part of the job?”, Chanel responded, “The students, no doubt about it.” She emphasized that although Trinistion Fellows are technically administrators, the fact that students view them as a friend or mentor is a rewarding feeling. Hamna Tariq ’20 of Pakistan, articulated how influential Chanel has been during her first year when she says, “I think Chanel has helped tremendously with my transition into Trinity. Not only has she been a great resource, but she is always ready to listen to my problems are encourage me. I wouldn’t have been able to settle in the way that I have without Chanel’s guidance, help and love.”
As Chanel’s time at Trinity comes to a close, as the current Trinsition Fellow tenure expires at the end of this year, she shared a few pieces of advice as to first-year students as they begin their college careers. She said, “Make use of every single opportunity this college has to offer you because you only get this chance for four years of your life.” She also stressed that it is perfectly normal and acceptable to ask for help and to not totally feel content when you start college, but not to be afraid to step outside of one’s comfort zone.
Chanel assured The Trinity Tripod that she has many exciting things in store for her next chapter after Trinity. Although she will be greatly missed, the positive effect she has had on the first year experiences for so many students has been of immense value and is something that will always be appreciated.