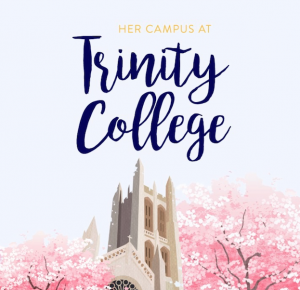 Her Campus is a media brand consisting of over 10,000 collegiate writers from over 300 campuses across the United States and in nine different countries. The Her Campus website consists of thousands of articles written entirely by college women. Her Campus describes their contributing journalists as “colligette’s.” That is, “A college woman who is on the top of her game – strategically career-minded, distinctly fashionable, socially connected, academically driven, and smartly health-conscious, who endeavors to get the most out of her college experience on every level.”
The brand was founded by three students at Harvard during their undergraduate years and has become widely popular across the nation. The Her Campus website is similar to Buzzfeed, offering sections on topics including career, love, style, life, health, high school, after college, news, opinion, entertainment, DIY, and quizzes. Not only does the website offer fun and interesting articles that cover a range of topics from “The Bachelor” to politics, it has a whole section of resources to help young women across the world get ready for college, manage their money, stay healthy, and get their dream job. The Her Campus team seamlessly combines entertainment with career-prepping opportunities for young women aspiring for success.
Trinity’s chapter of Her Campus is composed of a group of Trinity students who enjoy writing and are eager to gain meaningful skills in journalism. Each week, the Her Campus team interviews a Trinity student as the “Woman Crush Wednesday” of the week. These profiles are a great way to learn something new about a fellow Trinity student and can be found online on the Trinity section of the Her Campus website.
This year’s team has also published articles such as “Weekend Getaways from Campus” by Meghan Marsh, “How to Survive Trinity Finals” by Emily Llerena, “Obama is Protecting Planned Parenthood” by Mary Sullivan, and “What to Wear for Formal Season” by Mary Sullivan.
Part of what makes Her Campus so interesting is that the articles are written by Trinity students and are specific to Trinity’s campus. Trinity’s Her Campus team works hard to come up with content that’s relevant to all Trinity students and is fun and interesting to read.
Her Campus Trinity’s Campus Correspondent is Mary Sullivan ’19. As Campus Correspondent, Sullivan works “with Her Campus on a national basis.” Sullivan says that she joined Her Campus on a whim her freshman year even though she was “the only first-year student who joined that year and was extremely intimidated by all the upperclassmen.” However, she didn’t let that stop her and she ended up being asked by the former leader, Kelly Vaughan, if she would be the Campus Correspondent for the 2016-2017 academic year. She expressed that accepting a leadership position on Trinity’s Her Campus team has been a meaningful experience for her, saying that “as Her Campus grows across the country, what I’ve learned so far and continue to learn as Campus Correspondent will carry me to my future career.”
Sullivan also believes Her Campus to be a positive learning experience, stating that “I’ve learned a lot about time management and leadership through Her Campus, as well as how intricate the company is.”
So, if you want tips on how to make working out at Ferris fun, advice on where to buy swimsuits online, information on Trinity College’s study abroad programs, and tips as to how to survive the brutally cold New England weather, head over to the Her Campus website and find the Trinity chapter to read some awesome articles published by your peers.