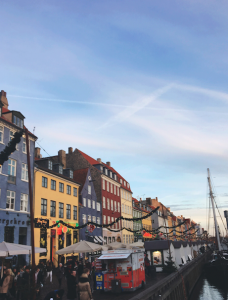 When I moved to Trinity three years ago, I was lucky enough to find a second home. When I moved to Copenhagen, Denmark, for the Fall 2016 semester, I was lucky enough to find a third.
Approximately 1,200 students from around the world study in Copenhagen every semester through the DIS program. Not only did DIS introduce me to a new and different way of life (did you know that over 50% of Danes ride their bikes to work every day? Even when it’s raining? Even when it’s SNOWING?), and amazing new friends from all different backgrounds, it also gave me the opportunity to travel in a way I never would have thought to be possible.
Due to Denmark’s relatively central location in the European Union, places that I had only ever dreamed of exploring were suddenly within reach. Athens and London turned into realities instead of locations at the top of my Travel Wish List. Exploring Italy for a week with new friends lead to pasta and gelato for Thanksgiving Dinner, and Oktoberfest became a place to reunite with my best friends from school instead of the world’s largest festival. Yet as amazing as traveling nearly every weekend was, there was always a sense of relief when I got back on Danish ground.
As much as I loved this experience and would encourage everyone to study away if they have the chance, there is a side of study abroad that no one seems to talk about. I loved Copenhagen and would go back in a heartbeat, even though there was a little homesickness and maybe even some FOMO due to not being at Trinity. I had only ever heard my friends who had studied abroad talk about how amazing it is and how they completely fell in love with their countries. Although I can relate to this, I had never heard anyone talk about the homesickness, I figured I was the only one who had experienced it. With that being said, if you have the opportunity to study abroad, I could not encourage the experience enough. Whether you do the Trinity-program on the Rome Campus or an outdoor leadership program in Patagonia (but really, you should go to Copenhagen because it’s the best city ever), you will have once in a lifetime experiences. You’ll travel to places you’ve always wanted to go, as well as places you never thought about going to. You’ll try foods you’ve never heard of some days, and sneak over to McDonalds for some late-night fries on others. You’ll be ready to head home to the States one day, and never ever want to leave the next.
For fear of sounding cliché I won’t say that abroad “totally” changed me. But I will say that going abroad changed the way I see the world, and how I see myself. Going abroad made me a lot more independent— I learned how to work the transportation systems even when they were in different languages (where I live, we don’t even have a train system), I learned how to cook (shout out to my friends who helped teach me so that I wouldn’t starve) and I even booked my own plane tickets and Airbnb’s for the first time (this is coming from someone whose mom still books her dental appointments).
So, to my friends who are thinking about studying abroad: go. To the people who have studied abroad and want to gush about it over coffee: you have access to my email. And finally, to Copenhagen: you are the best city, and I can’t wait to see you again — tak for alt.