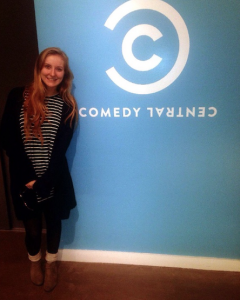 During the Fall of 2015, my junior year, I was accepted to a Viacom Internship at Comedy Central. Before this internship, I knew that I was interested in pursuing media or public relations, but was not 100% set on the television/film industry.
This was one of the most remarkable experiences that I’ve had during my college career. It was demanding and challenging but an overall amazing opportunity. At Trinity, I have learned communication skills and strengthened my attention to detail capacity. However, at Comedy Central, I was able to gain a whole different component of communication skills and many digital and marketing strategies. My supervisors, who were also the digital producers of “The Daily Show with Trevor Noah”, gave me many projects that expanded my knowledge of the Comedy Central brand and general television production.
Accepting this internship was a bit difficult for me at first. Even though it was my dream internship, it was also 2 hours away from my school. I had to rearrange my schedule to have two full days off per week from classes in order to make time to intern. It required 16 hours per week, and I had to take a 2.25 hour train every Thursday morning into New York City, and 2.25 hour train ride back into Hartford on Friday nights. Not only was I missing out on events that happened on campus my junior year, but I also had to find housing for Thursday nights in the city, which was not easy.
Nonetheless, no matter how much energy it took out of me to get there and back, I absolutely loved my internship. I cut clips from “Nathan for You”, “Archer”, “Review”, and more hilarious shows. I was asked to make GIFs and memes from those same TV shows. I also completed a semester long project brainstorming strategies to improve viewership on the platform Vine. Getting paid to watch episodes of Archer or Moonbeam City was pretty unreal. I also did a lot of fraud protection, by searching through uploaded content on Youtube and reporting recorded, unoriginal Comedy Central episodes. Lastly, one of my favorite assignments was to annotate and upload segmented videos of “The Daily Show with Trevor Noah” to Youtube, so that viewers could enjoy the best parts of Comedy Central’s shows even when they are not on air.
Two amazing things stood out during my semester-long internship. First, working at Comedy Central also meant being eligible for complimentary tickets to “The Daily Show.” Without a second thought, I accepted tickets and watched the show taping live from the audience (with a guest of my choice, too!) and swooned over Trevor Noah’s witty remarks. The second part of this internship was being asked to work incredibly cool events. I only imagined myself working in the office—which was cool enough on its own. Toward the end of the semester, I was invited to work at New York City’s Comic-Con, which would end up hosting over one million people. I was supposed to help set up equipment for “Broad City’s” own Abby Jacobson and Ilana Glazer, but Glazer had an interfering engagement that could not be moved. That was a bit of a disappointment because I adore those stars, but I ended up working a panel for Rashida Jones (from “Parks and Rec”). So, not so bad.
Comedy Central was an awesome internship, and if I could go back and do this experience all over again, I would in a heartbeat.