TRIP SLAYMAKER ’18
A&E EDITOR
James Hilton ’18 had an idea. As a junior year transfer student new to Trinity, Hilton arrive thinking about ways he could make the most of his time as an undergraduate. Next semester, Hilton’s project of 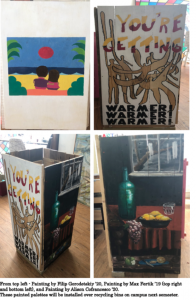 many months will be realized in the form of individually painted recycling bins made from wood palettes that will be permanently installed on campus.
Around the same time as he was searching for a meaningful project, Hilton was also noticing something else: “The recycling situation here is a little dire.” Across campus he noticed recycling bins with long, thin slits for paper so people couldn’t recycle cans, and other problems students seemed to be having with the recycling process. “One of the first things I noticed about Trinity was how many beer cans and solo cups go in the trash… there’s a lot of waste.” As a result, Hilton began to study up on the recycling system at Trinity, and the buildings and grounds protocols that controlled the system.
“Recycling is something that students can really control…It’s something the administration will listen to us about.”
Hilton hopes that by drawing attention to the recycling bins and making them more prominent fixtures on campus, the system will run more smoothly. “If you can create a positive association between recycling and art, you can improve people’s attitudes toward sustainability. By just drawing attention to the bins and making them stand out in some way, you’re elevating awareness of the issue.”
Hilton also hopes to bring more art to campus in general. On a campus that can sometimes feel “cold, imposing and gothic”, the bins are meant to bring a splash of color and life to even the bleakest winter day at Trinity. “I noticed that there was so much art on campus that wasn’t being expressed. We’ve got certain nooks and crannies that are kind of sequestered away, but I love things like freedom walls and freedom of expression, and I wanted to encourage students to show their art, and show an alternative side to Trinity.”
Hilton constructed the wooden boxes from disused palettes, a difficult feat of carpentry that required the help of a handful of others over many weeks. Working with saws and other tools out of the garage attached to Doonesbury, the process of making the bins was physically demanding.
The artists who contributed to the project are members of the Mill, and Hilton’s good friends. Several of the pieces that decorate the bins are meant to provoke thought, for example, the artwork of Mill member and artist Max Fertik ’19 is a comment about climate change. “The driving force of the project became to show that sustainability is inherently a creative process. We need to rethink the way we do everything, and synthesize something new out of something old.”