ERIN GANNON ’19
A&E EDITOR
What do directors Alfred Hitchcock, Stanley Kubrick, and Stephen Spielberg all have in common? None of them got their start in filmmaking using the online gaming website Club Penguin. This bizarre truth seems glaringly obvious, but for this week’s Bantam Artist of the Week, Cassia Armstrong ’18, that conclusion isn’t so outlandish.
Armstrong, a South Surrey, British Columbia, Canada native, was first introduced to the artistic realm of cinematography and photography when she was in elementary school. She became interested in making home movies when she was first introduced to YouTube around the age of nine or ten. She started using a screen recording program while playing Club Penguin, and, using Windows Movie Maker, would create what she described as “silly music videos.” At twelve, Armstrong got her first handheld camera. Whenever she had a sleepover with friends, they would make some sort of movie.
Having had a lot of exposure to the filmmaking process, Armstrong started taking film classes in high school and was introduced to more sophisticated equipment. “Everything just came together,” she said. “My hobby turned into something I was really passionate about and that I could actually do competitively.”
Armstrong is drawn to filmmaking and photography because of their infinite nature. “So long as you have a camera on you, the whole world becomes an opportunity to capture something beautiful,” she said. “It definitely changes the way I see the world, because even the most ordinary things can become art immediately.”
Even though she cherishes being behind the camera, Armstrong considers editing footage to be one of her favorite stages of filmmaking. “It’s incredibly satisfying to be able to feel out how different shots go together to create a smooth series of images which tell a story,” she said. “It’s amazing to see everything come together and to have control over how to make the audience feel just by adjusting milliseconds or music or colour.”
Keeping with her somewhat unorthodox foray to the film world, Armstrong’s earliest influences comes from YouTubers. She cites Charlie McDonnell, PJ Liguori, Olan Rogers, and Emily Diana Ruth among others as being her early inspiration for the more artistic aspect of filmmaking. “Ironically enough, amongst my friends I’m notorious for having seen very few iconic movies and knowing very little about famous directors and cinematographers.”
Not being familiar with traditional cinematic styles hasn’t stopped Armstrong from developing a distinct style of her own. “I think the word I use the most when describing the style of my work is ‘human’,” she said. “I love to capture laughter, awkward moments, innocent joy, and melancholy. I’ve been doing a lot of documentary-style projects lately, and my priority in these projects are always capturing candid moments.”
Though she hasn’t had significant opportunities to work on narrative projects, Armstrong is in the midst of writing a script that follows her “human” style. “The strongest scenes aren’t those revolving around the plot, but in capturing the messy emotion and humanity of the situation the characters find themselves in,” she explained. “I don’t know if my filmmaking style is exactly the most ‘popular’ style, unfortunately, because by emphasizing these things, the result is a slower-paced film, and people are really used to fast-paced media which appeal to lower attention spans.” Armstrong acknowledges films like “Her” or “Where the Wild Things Are” by Spike Jonze, “The F Word” (otherwise known as What If) by Michael Dowse, and “Tallulah” by Sian Heder as being the style of narrative, she would dream of directing.
Despite having found a passion for being behind the camera, at Trinity, Armstrong is double majoring in chemistry and environmental science. “People usually find this really funny given my involvement with film.” she explained. “When I was figuring out what I wanted to do in university, it was a really difficult decision between pursuing studies in the sciences, or going to film school.”
Luckily for Armstrong, she’s found several opportunities at Trinity to combine both of her unique passions. Over the summer, she made a documentary about summer science research at Trinity—one of two short films she is proudest of—and her research professor always allows her to take her camera to field sampling trips. Additionally, in her first semester at Trinity, Armstrong took Basic Filmmaking and has since had the opportunity to TA for two different Advanced Filmmaking sections. “Unfortunately that’s the most I can do academically with film while I’m at Trinity,” she said. “The rest of my semesters will be focused on completing the requirements for my majors.”
While the time she dedicates to film takes a backseat to her academic studies, Armstrong still finds ways to keep her passion alive. “I’m 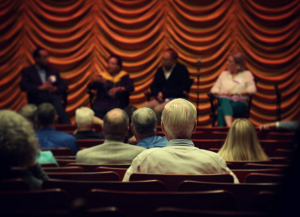 working on exposing myself to more films and styles by watching more movies and short films whenever I have the time,” she said. She has also begun taking photography more seriously, as she seeks to educate herself in the technical side of film. “Now that I’m trying to get new lenses and am trying to learn photography, it requires a better understanding of a lot of camera jargon which I would just allow to

go over my head before.”
Armstrong intends to continue her education in science and go to graduate school, but is grateful to Trinity for helping her realize that she doesn’t have to study her passion in an academic setting to pursue it. “The


opportunities I’ve had in the last couple of years have given me a lot of hope for doing film and photography on the side, even if I’m also doing science as my primary career,” she said. “I’m excited to be able to balance both of my passions in my life.”